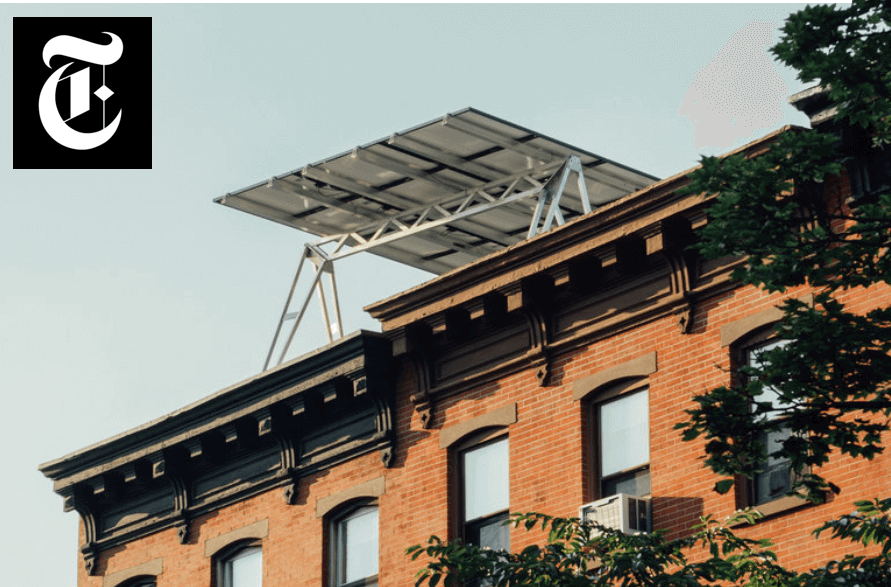 
Brooklyn SolarWorks was prominently featured in a new article on solar adoption in the New York Times’ Real Estate section on Monday, July 8. Written by staff writer C.J. Hughes, the piece reports on the recent growth of solar in NYC and the different factors contributing to this trend. We are one of only a handful of NYC-based residential installers and we specialize in serving flat roof, brownstone Brooklyn, so it was hardly a surprise that company co-founder and CEO T.R. Ludwig was invited to offer his insider perspective on local industry trends for the article.

Brooklyn SolarWorks canopy customer and Park Slope resident Alfred Ling is also quoted extensively about his experience as a solar owner in a community that was, until only very recently, a virtual “no go” zone for the solar industry. Drawing on public data published by New York State, the article specifically calls attention to BSW’s impressive solar adoption growth rate since 2015 in Park Slope, Prospect Heights and Clinton Hill, three neighborhoods at the core of our service area. (Curious how many installations we’ve completed in your neighborhood? Just type your zip code into handy Customer Map to find out.)

This article marks the second time that Brooklyn SolarWorks has appeared in the Times. Earlier features in Wired, Bloomberg, and Brownstoner cover many of the same themes, and also underscore the link between BSW’s unique business approach and increased solar adoption in New York.

If you own a solar system, it’s likely that you produce excess energy which is returned back to the grid. In New York City, Con Edison compensates you for this…

The 4 Solar Incentives that NYC Homeowners Should Know About Solar incentives and surging electricity rates make NYC one of the best solar markets in the country. Something we love…

The best part of Thanksgiving is reflecting on what and who we’re grateful for. This year, Brooklyn SolarWorks pondered the luxury of light. We’re so proud of the fact that…