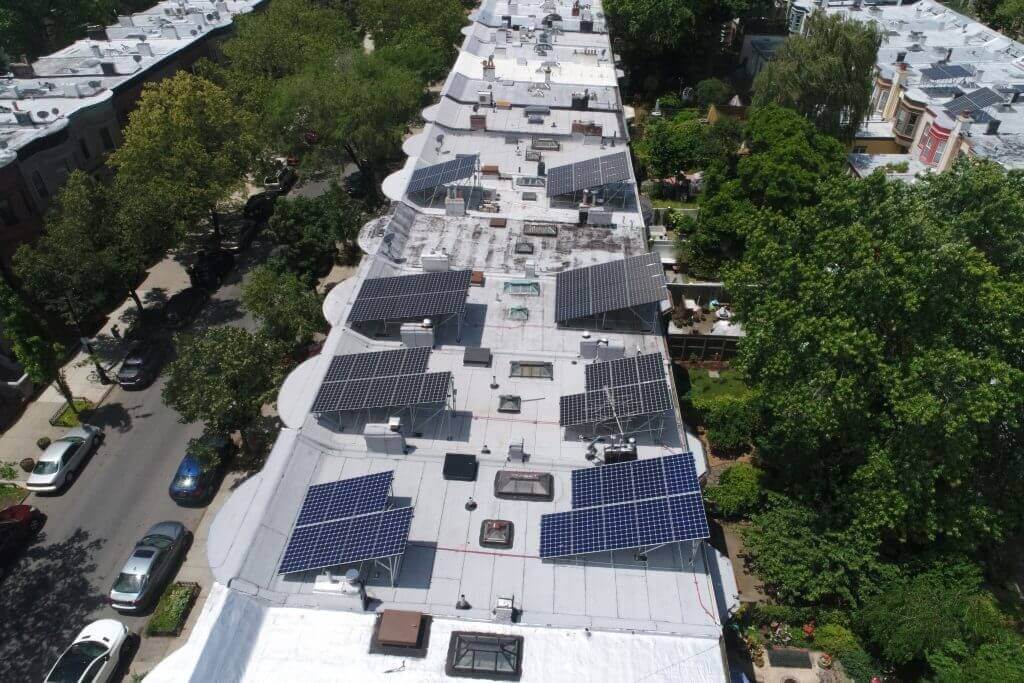 A row of solar neighbors in Park Slope.

Zillow.com compares prices of thousands of solar and non-solar homes. NYC has highest premium among cities.

According to an April 2019 study by Zillow.com, a leading online real estate database, resale value of homes with solar systems is 4.1% higher than comparable homes without solar. This translates into an additional $9,274 for the median valued home nationally. The study drew on a large sample of homes posted on Zillow’s website between March 1, 2018 and February 28, 2019.

The study found that the solar boost was higher in the New York metro area than the national average, topping out at 5.4% – with the NYC solar premium being 1.8% more than it is statewide. That’s an extra $23,989 in value for solar home owners in the five boroughs. This was the biggest differential observed among major cities.

The study reflects similar findings published by the Lawrence Berkeley National Laboratory in 2015. This earlier study drew on a sample of 23,000 homes in multiple states, including New York.

The data is also consistent with BSW’s own communications with current homeowners looking to sell in the near future, as well as with anecdotal feedback from a number local real estate agencies here in Brooklyn. Solar is an incredibly valuable investment in New York, given local incentives and high utility rates. It’s hardly a surprise that this fact is clearly showing up in local home prices.

By law, higher home value from solar is exempted from property tax assessments.

And while solar clearly increases resale value, no need to worry about solar adding to your property taxes. Albany has you covered with two separate laws that have been in the books for years. Under the NYS real property tax law sec. 487 rooftop solar is “exempt from taxation for a period of 15 years to the extent of any increase in assessed value due to the system.” And on top of this, through 2021, solar owners enjoy a property tax abatement equal to 20% of gross system cost. The abatement, first passed by the legislature in 2004, was extended in June 2018.

If you own a solar system, it’s likely that you produce excess energy which is returned back to the grid. In New York City, Con Edison compensates you for this…

The 4 Solar Incentives that NYC Homeowners Should Know About Solar incentives and surging electricity rates make NYC one of the best solar markets in the country. Something we love…

The best part of Thanksgiving is reflecting on what and who we’re grateful for. This year, Brooklyn SolarWorks pondered the luxury of light. We’re so proud of the fact that…